Hastinapur! It’s a city with a glorious past! While it finds mentioning in Mahabharata, it has also been a torch-bearer for historians who have been indulged in excavations here to know more about the history.

It is situated in Uttar Pradesh near Meerut on Ganga’s shores. The epic tales say that it was Kaurava’s capital and soon after the Mahabharata war, Pandavas ruled the city for over 36 years. From time to time, the city has been giving evidences in terms of astrological, natural, geographical, physical, inscriptional and scriptural proves to prove the city’s presence during Mahabharata war. Several temples have come out in excavations from the city by Archeological Survey of India.

Hastinapur also enjoys the credit of being a sacred pilgrimage for Jains. The 16th, 17th and 18th Tirthankars were born here out of the total of 24 Jain Tirthankars.

Although the city is blessed with many attractions, the five places which should be visited by those visiting Hastinapur are: 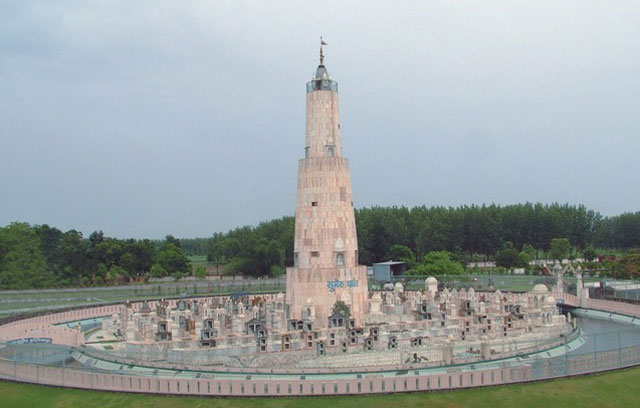 If you want to explore the overall structure of Jain geography, visit this temple. It will clear all your queries. The temple was designed under Gyanmati Mataji’s guidance who is also the edited with the title of Supreme Jain Sadhvi Param Pujya 105 Ganini Pramukh Aryika Shiromani. A 24-metre-tall Jambudweep is center of attraction here. Also there are many temples such as Jambudweep, Lotus temple along with dhyan kendra etc in the same complex.

The temple gives a glimpse of beautiful architecture and it is constructed on basis of Vedic texts. Bhagwan’s image could be seen under the dome. The Jain devotees are offered all kinds of facilities such as dining, bathing, accommodation etc.

If you want to make a compiled study of Jain Thirkankars, this is the right place as it represents all Thirthankars of the past, present and future. These are demonstrated via 3 stages along with its 72 temples. The main building in the middle of the complex is 131 feet high. The carved doorways, panels, pillars and ceilings are the main attraction here.

A Jain House of worship, it is located in the outdoor space of Jambudweep. It’s a small temple which is a renowned sightseeing spot in Hastinapur.

Can you ever imagine a brick structure standing erect at 151 ft.? if not, visit the Ashtapad which is one of the tallest brick structures in Meerut. There is a topmost temple which consists of marble cuttings and stone carvings.

Hastinapur is a place where you can see different parameters of architecture, different styles of temples infused with a spirit of spiritualism.

Also, if you are interested to know more about Jain culture, architecture and if you want to see the site which often appears in Mahabharata, then plan a visit to Hastinapur.