Bharatpur has made a mark on the global travel map and has been on the top list of international tourists. It houses the most amazing assets in the form of national park, which is crowned by UNESCO World Heritage Site tag, plush palaces, marvellous temples, forts and what not!

While Bharatpur palace and the Lohagarh fort speak about their historic mileage, the Bharatpur National Park is all famous with wildlife lovers. The Deeg Palace is another attraction being thronged by tourists in equal numbers from foreign as well as from Indian land.

Now let’s visit the most amazing sites of this city which have been centres of attractions of the domestic as well as foreign tourists:

Once upon a time, this used to be a duck shooting site of the royal rulers. However, 250 years, Maharaja Suraj Mal established this site. On 13 March 1956, this site was marked under the name of Bharatpur Bird Sanctuary. And on 10 March 1982, it was tagged as a national park and named as Keoladeo Ghana National Park. It gained another laurel in 1985 when it was accepted as a World Heritage Site by UNESCO. It’s a reserve forest owned by state of Rajasthan and is flocked by as many as one lakh people every year.

It has 50 species of fishes and 5 amphibian’s species. Also, there are 7 species of turtles.  The avian fauna of 375 species of birds. The Flora here houses 392 species of angiosperms which include trees (like kalam), shrubs, marshes   and hydrophytes. 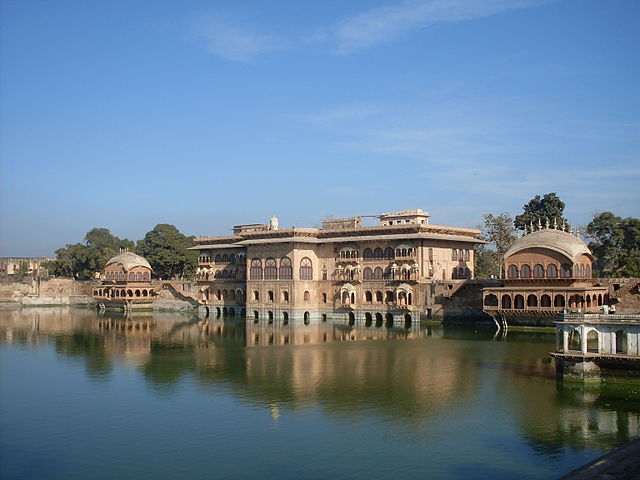 This is one palace which speaks of the stories of Jat rulers who ruled here for quite many a year. It’s 32-km away from the city and has gained ultimate glory for the huge royal palace which has been managed beautifully. It was inhabited by its inheritors till the year 1970. In the year 1730, Raja Suraj Mal materialised his long lasting dream of owning a beautiful palace in the form of Deeg Palace. The pride of Jat rulers, it also stands as a living testimony to Jat rulers who had shown their brilliant bravery against the Mughals and Marathas.

This beautiful temple started its construction in 1845 which continued for next 90 years to get finished. Located in the heart of Bharatpur city. it’s counted as one among the most beautiful temples in Rajasthan. The construction of this temple was commenced by Maharaja Balwant Singh in 1845. Once the construction was finished, deity Ganga’s idol was placed in the temple by Brijendra Singh. He was the fifth descendant of Balwant Singh. And this temple hence was known as Ganga Temple. It blends three styles of architecture namely Rajput, Mughal and South Indian styles.

If you want to see the archaeological wealth of Bharatpur you should visit this museum which is situated in the Centre of the Lohagarh Fort. It’s administrative block of the rulers of the Bharatpur state, known with the name of Kachahari Kalan, which was converted into a museum in 1944 AD. Later, on the first floor, the Kamra Khas was added to the museum, which displayed a rich collection of antiquities, sculptures and inscriptions. The 2nd century collections demonstrating the art and skill of the region also found in the central wing of the museum. While the main exhibits at the museum houses sculptures, dating back to 1st to 19th century AD. These were found while excavating old villages.

This temple is 400 years old and is situated in the heart of the city. According to legends, one Naaga Baba, a saint who worked for upliftment of the mankind, built this temple. It displays typical Rajasthan style of architecture. In its neighborhood, there is another Laxman Temple, which was built by Maharaja Baldev Singh in1870. This is constructed by using sandstone and white marble. There are Ashtdhaatu idols of Laxmanji and Urmilaji.

So if you want to follow the chapters of history and see how and when the beautiful places in Bharatpur came into existence, you should visit this place once and you will be surprised to see the plethora of attractions here!