Jowai is a scenic destination situated in the lap of beautiful Meghalaya. Surrounded by Myntdu river from its three sides, it enjoys cool, chilly winters while the summers are pleasant.

It’s known as the home city for Pnar tribes. Also known as the West Jaintia Hills district headquarters, this city has played host to thousands of global travelers.

Jowai serves as a complete destination for family, kids and couples.  The city’s sightseeing can be done in a day or two depending upon your schedule and itinerary.

The best time to visit this place is March and April. The other two months of October and November, are also best suited to visit this place. As it’s a safe city, the local attractions can be visited any time be it morning or evening, afternoon or night.

Now, let’s discuss a few destinations which are all-time favorites of tourists here.

The Village of Nartiang encompasses remnants of Summer Palace which was once owned by the Jaintia King. His capital used to be Jaintiapur. Today, these remnants are seen on a hillock spread along a two kilometer stretch from the Nartiang market. Another place to visit here is the age-old Shiva Temple where the present priests are the descendants of the then Jaintiapur priests. Many cannons were found from the Shiv Temple which shows that the laborers were skilled in making and designing firearms.

This village is also renowned for a collection of monoliths, which are known to be the largest in the state. Also the presence of the ancient Hindu Temples including the Durga and Shiva temples give it a distinguished identity. Every year, the devotees perform Durga Puja in Nartiang Village. 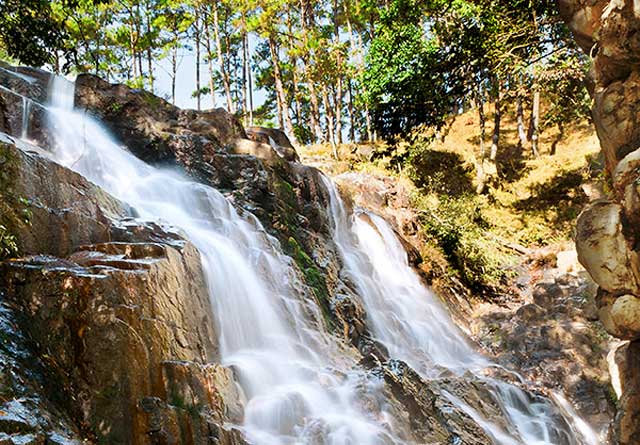 Located at a distance of 5 kilometers from Jowai, this is a pristine cascading waterfall. The gushing water goes down to Pynthor, also known as paddy fields below and presents a mesmerizing scene. There is a well-made arch bridge which opens to the roaring sounds of Tyrshi falls. The arch bridge gives a beautiful view of Panthor Nein, a rice valley and enchants visitors through out with its enormous beauty.

It is situated on the Shillong-Jowai Road (NH 44) and competes with Shillong’s Elephant Falls.

If you want to explore yet another nature’s marvel, then Jarain Pitcher Plant Lake is the place to be. Surrounded by well-carved footpaths, pitcher plant gardens and arch bridges, this lake is pretty and spreads over 50,000 sq.mt. What makes it a little different from the rest of the attractions is the exciting boat rides here. They give an altogether a fresh experience to the visitors. A pitcher plant, fountain-shaped, can be seen in the center of the lake giving it an amazing and distinguished look. It’s an ultimate sight for tourists and locals.

The name of the place literally means flower of gold. What makes this place renowned is the memorial built in the honor of Kiang Nangbah who played a key role in the Indian independence struggle. Situated on the banks of the Myntdu river, this place is generally visited by those who love to go for picnics and angling. Tourists love visiting the statue of Kiang Nangbah which is located in a field known by the name of ‘Madiah Kmai’.

Situated 8 kilometers away from of Jowai on National Highway 44, this lake was formed by the collective effort of over 290 tribes from Sajjar Niangli Village. In an endeavor to save themselves from the attack of Jaintiapur king, they dig this lake. It is still worshipped by people of the Raid Mukhala tribe. They revere the lake and continue offering sacrifices near it. A perennial spring has been feeding this man-made lake for the last many years.

There is a story behind the making of this lake. According to a legend, Sajar Nangli, one of the army chiefs, shared a major difference with Jaintiapur king.

There was a bloodbath reported in between and this chief decided to run away with his followers, as he didn’t want himself to be blamed for it. However, before he ran away, his followers along with him, dug the Thadlaskein Lake. The bow’s ends were buried in the form of memoirs. Presently, this lake is a famous picnic spot for locals.

Besides the above described attractions, the city is blessed by nature and provides many other places to visit. It is connected by road to Shillong, which is located at a distance of 60 kilometers.

This city acts as a treasure trove for bag packers who get everything right from history to nature trails, parks to water falls, rivers to lakes and what not! The pristine views are something which can’t be scrapped from the memory lane. So it’s the time to pack your bags and bask in the nature to refresh and rejuvenate your senses.