An eponymous city in the state of Madhya Pradesh is Gwalior. This major site of rebellion during the 1857 uprising has emerged as a distinguished and important tourist destination in India. This land has wonderful stories of history and religion narrated through various tombs, forts and temples and hence Gwalior is one of the most important tourist destinations in Madhya Pradesh.

Gwalior faces very harsh conditions during March to June and the last weeks of December and the initial weeks of January. The best time to visit would be during the end of October to early March.

A cornucopia of art, music, history is the museum of Kala Vithika. It is located in the Padav area of Gwalior and is easily accessible by any means of transportation. The architecture of this building is typical of the Gwalior style and the museum showcases a fusion of ancient and contemporary art which caters to different age groups of patrons. Kala Vithika is the best place to visit as a fun and educational trip. 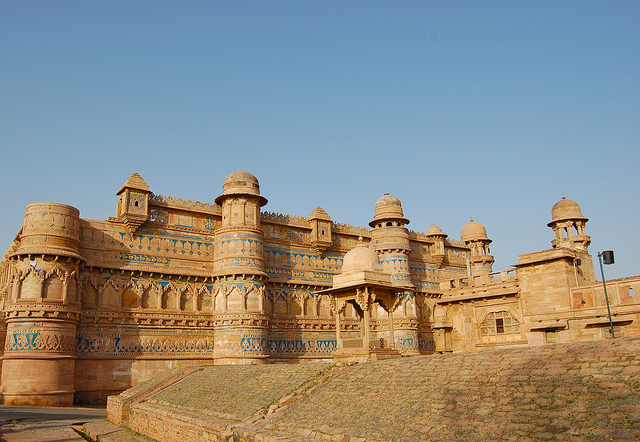 The huge, daunting fort of Gwalior spread over an area of 3 sq. km is the most beautiful yet intimidating fortification one will witness. The fort is situated atop a 3 km long plateau overlooking Gwalior. It encloses three temples, six palaces and numerous water tanks. There are many other significant places within the fort such as the Karan Palace, Jahangir Mahal, Shah Jahan Mahal and the Gujri Mahal. A one-day visit to this beautiful fort is a must for a tourist in Gwalior.

Locate at a distance of about 4 km is the Gwalior zoo. This zoo is home to a wide variety of fauna and flora including a white tiger. It is part of a huge garden known as Phool Bagh which was inaugurated in the year 1922. This Phool Bagh campus also includes a Gurudwara, a mosque and a prayer hall. The zoo is open from 8:00 am to 6:00 pm from closed Fridays.

The tomb of one of the most heroic freedom fighters Rani Lakshmi Bai is located in the Phool Bagh area of Gwalior. It is one of the most visited places in Gwalior because of the history associated with it. There is a tall equestrian statue of Lakshmi Bai which is a depiction of valor, courage and patriotism. In addition, there is also a fair organized on the 18th of June in the memory of her freedom struggle for our country.

One can easily day that Gwalior is synonymous with the land of heroism, patriotism infused with rich history, culture and religion. The true essence of being an Indian can be completely realized only when one visits this beautiful land.