A major city in Andhra Pradesh, on the banks of the river Krishna and also known as the business capital of Andhra Pradesh is Vijayawada.

The best time to visit Vijayawada would be during the winter, when the temperature is pretty low and the weather is salubrious. Monsoons are enjoyable for people who like to stay indoors as the weather is pretty chill and there is lush greenery all around. Summers are best avoided due to the variable but scorching heat. 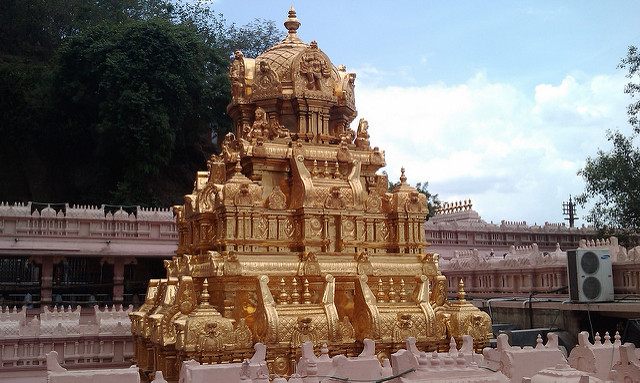 Kanaka Durga temple is to Vijayawada like the Taj Mahal is to Agra. Dedicated to Goddess Durga, this temple is located on the Indrakeeladri Hill on the banks of River Krishna and it is easily accessible from railway station and bus stand as it is located in the heart of the city. The deity is considered self-manifested and is considered very auspicious to seek her blessings!

The Dasara Festival, Vasantha Navaratrulu, Brahmotsavas are some of the main festivals conducted annually and sees thousands of devotees. There are many pilgrim services offered here such as Darshana, Anna Prasada, Kalaradhana to name a few and there is accommodation available for tourists so that they can have a comfortable stay and also take a tour to the nearby places. 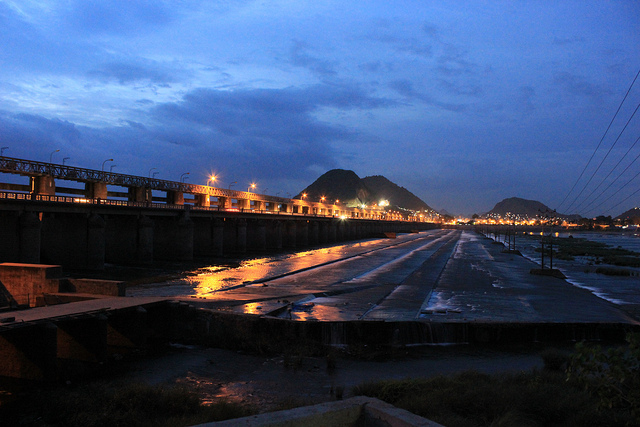 Photo by vijay chennupati, CC BY 2.0

Ranging across the Krishna and Guntur districts, the Prakasam Barrage has the last three canals passing through Vijayawada. This magical place which is a heaven for photographers and people seeking peace of mind after a hectic week is a major power lifeline to Andhra Pradesh.

The structure of the barrage is an engineering marvel and stands tall over the beautiful lake and the three canals which run through Vijayawada give it a winding, tangled Venetian appearance. The cool breeze, the clear waters and the beautiful sky above make this place a sought after tourist destination. The barrage is best visited in November and March and it is open at all times. 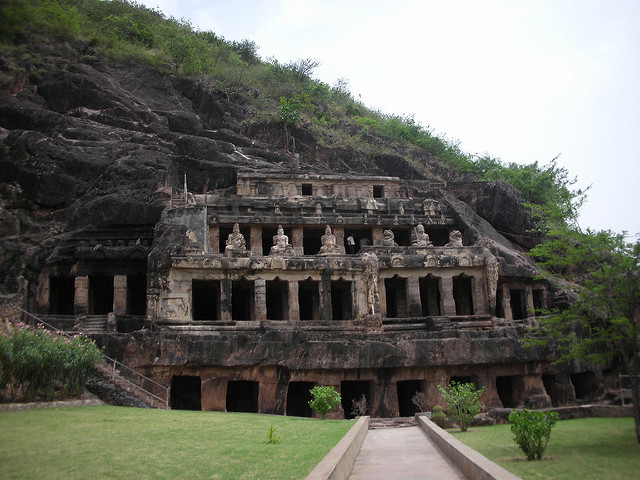 Like the Ajanta Ellora caves is to Maharashtra, Undavalli caves which is a monolithic marvel located in Undavalli in Guntur is one of the prime examples of Indian rock-cut architecture.

Located at just 6km to the south west of Vijayawada these caves mainly have shrines dedicated to Brahma, Vishnu and Maheshwara. It is a fusion of Hindu and Buddhist mythology with the first floor still retained in the style of Buddhist Vihara. The walls are intricately carved and display sculptures and inside the second floor is a huge monolithic statue of Lord Vishnu in a reclining posture.

This place is best visited from October and February as the climate is pleasant and the panoramic view from the top of the cave of the agricultural expanse is just beautiful!

Also known as the Victoria Jubilee Museum, this archeological museum is exclusively dedicated to Buddhist and Hindu relics and the architecture is of Indo-European style. It is located on the Bander Road in Vijayawada.

Initially known for housing industrial exhibitions, its focus was later directed to archeology; there are historical galleries, a white limestone statue of standing Buddha, the Goddess Durga’s slaying of the Buffalo demon Mahishasura is also found in addition to Terra Cotta paintings, Portrait Wall, Mother Mary, Queen Victoria, Napoleon Bonaparte, arrows and quivers, daggers so on and so forth.

It makes for a nice one-day trip to get a sneak-peak into the Pre Proto History and is open on all days except for Fridays and public holidays from 10:30 am to 5:00 pm.

Popularly known as Kondapalli Kota, the Kondapalli Fort is historically, architecturally significant structure which was a strong military fortification during the British reign.

It is located at a distance of 16 km from the Vijayawada city and mainly served as a recreational place for kings. There is the famous dargah of Garib Sahib, a Persian saint and the noteworthy Tanisha Mahal which is located at the very top of the hillock. One can catch a glimpse of the royalty and the military through the various segments of the fort such as the Gajashala, Ranimahal, Bhojanashala, Virupaksha Temple and the prisons which were built in the 14th century. One can take a trip into the surrounding village and purchase some famous Kondipalli toys which are popular globally.

The fort remains open throughout the day for visit and is best visited from September to February when the festivities in all its glory are just around the corner!